His left hand holds Light / Fire and his right hand holds Drum / Damru / Sound. The process of Evolution which starts with the absolute time and Pranava is fantastically represented pictorially. It suggests that the evolution process starts with the rhythmic dance of the PARAMAANU in a 8×8 energy grid and this process evolves first as light and then as sound. This light and sound creates further forms and the entire universe.

It is very easy to answer as to why sound evolves from light? We all know that the light is at a higher frequency and velocity than sound. This is the same reason we see lightning first then hear the thunders. So let’s summarize the DANCE OF EVOLUTION of NATARAJA:

If this is so then the process of dissolution should be that Nataraja’s right leg should be lifted suggesting a movement from right to left isn’t? Look at the majestic picture suggesting the DANCE of EVOLUTION and the DANCE of DISSOLUTION as below… 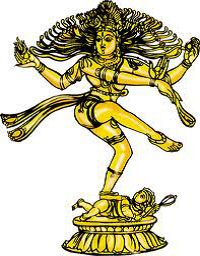 There is nothing more scientific in this world that is pictorially represented about the evolution of universe. You should read a book called “The Tao of Physics” by Frijat Capra where as physicist he explains how he experienced this and highlights the dance of the quantum particles in space corresponds to the dance of Nataraja.

Now this central shaft of Consciousness is called Brahma Sutra and according to our scriptures Paramaanu has this string, which means every being, matter, inanimate things in this universe including the tiniest of subatomic particles have this string / sutra. In the future parts we will see the Maths behind this sutra and the pulsation but let us look at what the modern science says about Superstring theory here. Also check out Nataraja at the CERN.

As a wise man said, “We are the most ignorant about their rich past and scientific traditions.” We have a very rich past that is most scientific and it is left codified in a form across thousands of temples in India. Let us just open your eyes and understand the scientific meaning around it. May that “Sutradhaari” dispel our ignorance and reveal to us the secrets of nature.

“The Self unfolds itself for its Self “– Bhagavad Gita

The Self unfolded itself with a pulsation and this pulsation is the start of Absolute time (KAALAM). This is the point of singularity in the scientific language and the event is termed as Big Bang. As we saw earlier it was an event of primordial pulsation and not of an explosion which threw away mass because of the explosion into the space. The entire space existed with its subatomic particles and this pulsation made the space to vibrate and this vibration was rhythmic and led to the evolution of this universe. Popularly known as “That one became many”… and ..Vastur eva Vaastu.

This pulsation happened because of the Pranava or the first pulsation resulted in the Pranava both conceptually right. So at the time of this primordial pulsation 2 things happened:

This is the reason that Pranava / Primordial OM is so sacred. This Pranava had manifested in 2 forms…

Now this concept is very important, since in the Pranava meditation they say us to meditate on the silence after the word OM and also mediate OM as light, OM jyoti rasaha in vedas. So, when we say that sound merges into light, it is all the aural form merges into its luminescent form. All luminescent forms merge with the Paramaanu which is also luminescent. Siddhar Thirumoolar states brilliantly that who realizes that the light (physical light which means the world) merges with light (subtle light), he has realized SIVA (Consciousness).

Now let’s come to the 8×8 energy grid of the Paramaanu and imagine that it is pulsating because of Pranava and this Pranava has both light and aural form. 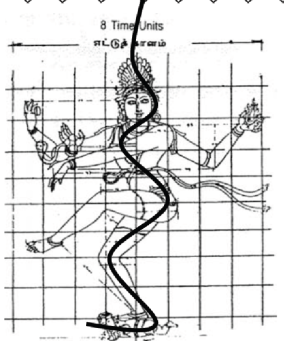 Look again at the picture of NATARAJA, he is drawn inside a 8×8 Manduka mandala (now you know what it is), his left leg is raised suggesting a movement from left to right. Imagine that he is going to land the left leg to his right side. Tomorrow we will reasoning behind it and explore more on this.

At the beginning it was just Consciousness that was luminescent with unmanifested potential energy and residing at resonant state of non‐vibration. This energy was self manifest and was ever-present as Paramaanu or Microbode or Vinporul aka a subatomic or god particle. This is omnipotent, omniscient and omnipresent.

If we look at this particle’s characteristics scientifically, it is Eternal (Anaadi), Primordial (Aadi), without any quality (Nirguna), it cannot be reached / grasped by thoughts of mind (Achintya) since thoughts as energy are much more gross than this, it cannot be measured (Aprameya), Luminescent (Jyothi swaroopa), its omnipotence (Ishvara), omnipresence (Vishva) and Omniscience (Sarvajna) is already known. We can observe that all the characteristics of the god particle are attributed to a personality or a state by the founders of religions.

Every religion and sage has agreed with the fact this fundamental particle or potential energy is LUMINESCENT. Let us see few quotes on this (there are thousands of quotes): 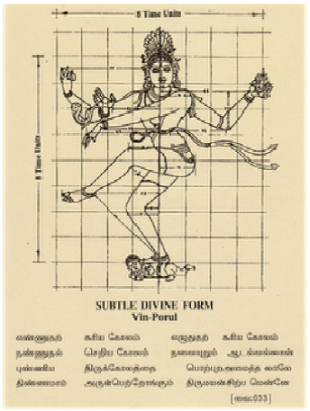 This concept is captured by representing a Manduka (Frog) or Sarpa (Snake) always. Since for a frog and a snake the ears and eyes are merged. Manduka Upanishad, represents knowledge of this state. And obviously the 8×8 square / cube represent the most subtle energy as an energy grid is called as Manduka Pada / Mandala. The same aspect when it is applied to a gross form / body or a building then it is a 9×9 energy grid and it is called as Paramasyika Mandala. At the gross level the same concept as applied is the WORD where Light (form) and sound and meaning merged into one.

Earlier we saw why the language Tamil is called so and its relation with science. We will start with that brief explanation and then lets see how Tamil is related with our breath.

First the throbbing Consciousness withdraws into itself. Moolam (Originating Source) consolidates itself through withdrawal called Amizhdal or converging to a point. Minute Cubical tip This Moolam then gushes or explodes outward and emerges and spreads (Imizhdal) and consolidates its self (Kumizhdal). The movement of energy in self spin (kalavisai) propels and projects this energy (Umizhdal) so that it comes out into form (Tamizdhal).

Interestingly enough, for the experience to merge into word-form the inner being has to undergo or travel through these five levels states, namely Amizhdal (“converging to a point”…withdrawal), Imizhdal (‘emerging and spreading’), Kumizhdal (coming together an consolidating’), Unizhdal (projecting or delivering) and Tamizdhal (“coming out into form”). Hence a language as rich with the sweetness of inherent order, originating from the luminosity of the Source is called Tamil. Tamil is word based on the final resultant state called Tamizhdal (தமிழ்தல்).

What most inspires me about this description of the unfolding of life is that it is a love story, the greatest love story, in that it is this Supreme 1st impulse of Love that brought and continues to bring into being, in every nano second, all that we know and experience as our world and the pulsating universe. It starts as the Originating One Source, called Moolam, Brahmam, The Quantum field, finding itself to be so beautiful and perfect and so in love with that beauty and perfection that it begins to vibrate, pulse, spin and order itself, manifesting over and over again into the myriad of material forms in the universe in order to experience and savor that beauty eternally. This process of manifestation besides being vibrant with the impulse of love is spontaneous, orderly, intelligent, unforced, auto catalytic, and pure.

Light travels at a speed of over 300,000 kilometers per second. Theoretically, nothing is faster than light. Some scientists are even suggesting Neutrinos still faster than light in latest version of experiment. In Mahabharatha, Yakshaprasna, the Yaksha will question this to King Yudhishtra as to “what is fastest thing in this world”? King Yudhishtra would reply as “mind”.

According to the Buddha, the speed of mind is faster than the speed of light. In a split of second, the mind can travel and reach up to three thousand of galaxies of worlds. Not only that the mind is fast and far-reaching, its karmic effect are extensive and profound. Always busy is the mind which runs into the past, the present, the future, and back and forth. It grasps at anything it comes across. The mind is constantly loaded with creations made of images, odors, tastes, sounds, touch contacts and discriminating thoughts. As a result, we are trapped in a fast-moving, non-stop, elusive and karmic mental stream. It hinders us from seeing our original nature. That is why we need to control and purify our mind.

Some of the sages have interpreted that since Consciousness is omnipotent and ever connected the communication is seamless, instantaneous and not subjected to the concept of distance. Remember, mind operates only with in the limits of time and space. But Paramaanu or God Particle operates beyond Time and Space. It is instantaneous and hence the whole universe needs to be considered as a being. So to conclude each particle is filled with intelligence and consciousness and their communication to anything is not subject to concept of distance.

Mamuni Mayan said: Supreme Being is omnipresent and the exceptional art (manifestation process) is eternal. Experience of the Supreme Being’s consciousness led me to worship spiritual Light. Blessings of the Supreme Being helped me visualize ‘Nataraja,’ the dance of Shiva (vibration of the thread of consciousness – Brahma Sutra). Blessings of the Supreme Being helped me create this magnificent art. Nataraja or Luminous thread is the Cosmic Dancer who dances or vibrates by its own volition as it arouses itself to manifest within itself. This vibration or frequency gives rise to the entire material world as individuated frequencies or waveforms. These manifested waveforms called Vishnu (Vaastu) become the Dance. This form is visually demonstrated and encoded through the beautiful statue Mayan cognized and created called Nataraja. When we look at Manduka Mandala or Vastu Purusha Mandala we can think of Nataraja and Luminous space. This inimitable light that Nataraja demonstrates is of the nature of consciousness itself. 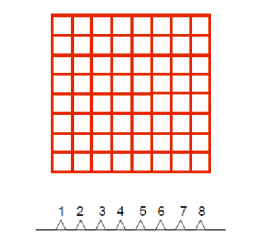 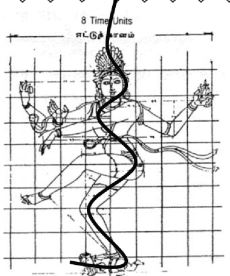 परमानुिरित प्रोक्तं योिगनाम 􀇺ि􀃧ट गोचरम ! (Paramaanuriti proktam Yoginaam, drishti gocharam) says Mayamatham. This means the microspace or Paramaanu is visible to the trained contemplatives and meditators only. Living proof for all is the Temple in Chidambaram which represents Space tattva where the temple is built around the concept with enough documentation on it. Many great sages, siddhars, rishis and yogis have seen it and expressed this divine light form in their poems and scriptures. Some of sages like Mamuni Mayan have not only seen this, but have given the dimensions of this and the mathematical formula to manage this energy. Salutations to all the great souls…

1. Fabric of The Universe: The Origins, Implications, and Applications of Vastu Science By Jessie J. Mercay
2. Time = Space by Raguram Gopalan, http://ragsgopalan.blogspot.com