Tasmin sati svasaprasvasayor-gativicchedah pranayamah – “Regulation of breath or the control of Prana is the stoppage of inhalation and exhalation, which follows after securing that steadiness of posture or seat.” This is the definition of Pranayama in the Yoga-sutras of Patanjali.

Prana is Vyashti, when the individual is concerned. The sum total of the cosmic energy or cosmic Prana is Hiranyagarbha who is known as the floating ‘Golden-Egg’. Hiranyagarbha is Samashti Prana. One match stick is Vyashti (single). The whole match box is Samashti. A single mango-tree is Vyashti. The whole mango grove is Samashti. The energy in the body is Prana. By controlling the motion of the lungs or respiratory organs, we can control the Prana that is vibrating inside. By control of Prana, the mind can be easily controlled, because the mind is fastened to the Prana, like the bird to the string. Just as the bird that is tied to a post by a string, after flying here and there, finds its resting place in the post, so also this mind-bird after running hither and thither, in various sensual objects, finds its resting place during deep sleep in the Prana.

Pranayama (According to the Gita)

Pranayama (According To Sri Sankaracharya)

“Pranayama is the control of all life-forces by realising naught but Brahman in all things as the mind, etc. “The negation of the Universe is the outgoing breath. The thought: ‘I am Brahman’ itself is called the incoming breath. The permanence of that thought thereafter is the restrained breath. This is the Pranayama of the wise, while the pressing of the nose is only for the unknowing.” (Aparokshanubhuti, 118-120).

‘The Science of Pranayama’ by Sri Swami Sivananda 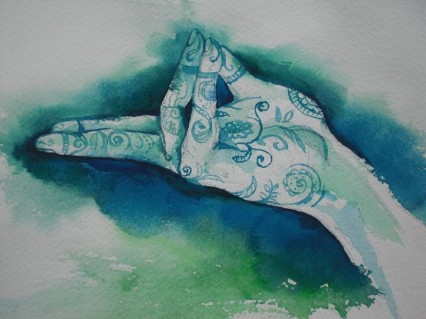 This technique is called Pran Mudra

This is called the Mudra of Life as it improves our vital life force and empowers our life from the inside out.

Bend the ring finger and the little finger and touch the tip of the thumb with their tips keeping the remaining two fingers stretched upward and together. Do this with both hands placing them comfortably by your side or on your lap while relaxing the shoulders.

Can you feel the energy between your fingertips? Do you notice some softening in any tight areas? What colors and textures does your mind’s eye see? Notice any thoughts that arise while trying not to follow any specific line of thought. Just keep returning to your Body Current™ by focusing your awareness on your breath and the sensations in your body.

You can do this anywhere, anytime for however long you wish! There are no contraindications and the side effects are great! Enjoy this simple and accessible technique whenever you need a bit more balance and ease.

Happy Balancing to you!

“Now is described the discipline for inner purification by which self-knowledge is attained: When the food is pure, the mind becomes pure. When the mind is pure the memory [smriti–memory of our eternal spirit-Self] becomes firm. When the memory is firm all ties are loosened” (Chandogya Upanishad 7.26.2).

“From food, verily, are produced all creatures–whatsoever dwell on earth. By food alone, furthermore, do they live.…From food all creatures are born: by food, when born, they grow.…Verily, different from this, which consists of the essence of food, but within it, is another self, which consists of the vital breath [prana]. By this the former is filled. This too has the shape of a man. Like the human shape of the former is the human shape of the latter” (Taittiriya Upanishad 2.2.1).

For mind, my child, comes of earth, breath of water, speech of fire. His son Svetaketu already realizing his mistake, requests his father to tell him more and his father continues. Man (purusha), my son, consists of sixteen parts. Abstain from food for fifteen days, but drink as much water as you like, for breath comes from water, and you will not be cut off, if you drink water. Svetaketu abstained from food for fifteen days. Then he came to his father and said: ‘What shall I say?’ The father said: ‘Repeat the Rik, Yagus, and Saman verses.’ His son replied: ‘They do not occur to me, Sir.’ His father explains that your mind is weak and the recollection of your knowledge is difficult since you have not had food for 15 days. He asks his son to have food and realize that he can recollect his knowledge. The discussion continues this way in Chandogya Upanishad.

The traditional treatment for infertility in India even today is to give medicated cow ghee for the man of the family to eat it for 48 days. This is because semen is produced from Bone marrow as per Siddha / Ayurveda and quality of semen would improve when the good fat content (this is from Cow’s ghee) is increased in the intake.

Why can we live without food for few weeks but we cannot manage without water more than few days?

The following is an excerpt from Chandogya Upanishad, a discussion between Svetaketu Aruneya (the grandson of Aruna) and his father (Uddilaka, the son of Aruna). When Svetaketu returned to his father, at the age of twenty-four, having then studied all the Vedas, conceited himself to be well-read and stern. His father being a very wise man wanted to teach his son a lesson in humility and wanted to highlight that his self-conceit does not befit him.

We are not going see the entire conversation which is very interesting and can be read more from Internet or books. Tomorrow we will see the most interesting aspect of food and its manifestation.

Earlier we saw why the language Tamil is called so and its relation with science. We will start with that brief explanation and then lets see how Tamil is related with our breath.

First the throbbing Consciousness withdraws into itself. Moolam (Originating Source) consolidates itself through withdrawal called Amizhdal or converging to a point. Minute Cubical tip This Moolam then gushes or explodes outward and emerges and spreads (Imizhdal) and consolidates its self (Kumizhdal). The movement of energy in self spin (kalavisai) propels and projects this energy (Umizhdal) so that it comes out into form (Tamizdhal).

Interestingly enough, for the experience to merge into word-form the inner being has to undergo or travel through these five levels states, namely Amizhdal (“converging to a point”…withdrawal), Imizhdal (‘emerging and spreading’), Kumizhdal (coming together an consolidating’), Unizhdal (projecting or delivering) and Tamizdhal (“coming out into form”). Hence a language as rich with the sweetness of inherent order, originating from the luminosity of the Source is called Tamil. Tamil is word based on the final resultant state called Tamizhdal (தமிழ்தல்).

In ancient days all things are interrelated with each other and one forms the basis for the other. Let’s look at how breath and time are closely related.

Lets begin with the interesting quote of Swami Chinmaya on time which states that “Time is the period between two thoughts”. As we know a day is divided into 24 hours and each hour with 60 minutes. The fundamental unit of time today is a second for day today life. In ancient India a day is divided into 60 units and not 24 hours, and each unit is called as Nazhigai which has 24 minutes. Two Nazhigai is called a Muhurtam which is 48 minutes. Both of them are very significant measures. So each hour has 2.5 Nazhigai.

We can note that both of Nazhigai and Muhurtam are multiples of 8 which is the fundamental resonance numeral.