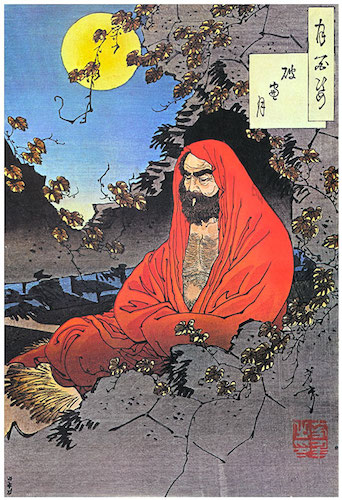 Bodhidharma was the 28th successor of the Buddha in the Ch’an tradition.

He traveled from India to China in the sixth century. When he arrived he saw that the people he encountered had a very shallow understanding of Buddhism.

When he came to understand Chinese philosophy, he developed the teachings that we now call Ch’an (and Zen). He taught two primary methods of Awakening.

He taught students that there was really no line separating them from the Buddha. The only difference is that the Buddha understood he was Enlightened and the rest of us don’t realize that yet. If we are motivated in the quest to understand our true nature, then we will attain Enlightenment too.

Meditation is a powerful tool for delivering us to Awakening. Bodhidharma called his main teaching wall-gazing. It is simply silent meditation while facing a wall. In this, no thought is given to goals or the path. There is only us and the wall. In this teaching Bodhidharma doesn’t really show us anything, he just instructs us to seek the truth ourselves. We just sit there and stare at a wall until we realize that we don’t need to be shown anything. The truth is within us.

Bodhidharma suggested four methods for walking the path. They are:

These are the main ideas of Bodhidharma’s teaching.

7 thoughts on “Why Bodhidharma Still Matters…”