We have seen earlier that the subtle energy is takes the form of a square and the gross energy takes the form of a circle with an in‐between state it takes the shape of a octagon. According to Pranava Veda, these three intermediary archetypical forms have separate qualities. Thus they are called the three Gunas. Guna means quality. They are Satvva (8×8 Square; Rajas (octagon); and, Tamas (circle). Sattva, according to Mayan is a steady restful, and peaceful state. Rajas is a dynamic state of form. Tamas contains massive or gross material qualities.

According to Pranava Veda each and every material substance, regardless of its outer shape, is ingrained with a three-segmented subtle design. These segments each have an individual design and are linked together to create a whole structure. These shapes are ingrained within all cosmic and worldly structures and all cosmic and worldly structures are ingrained in these cosmic structures. These three “gunas” or qualities signify qualities of the structures. This three-segmented subtle design is the subtle form of Pranava (AUM Light and AUM Sound). Mayan calls this three-fold cosmic subtle design “mun nilai.” 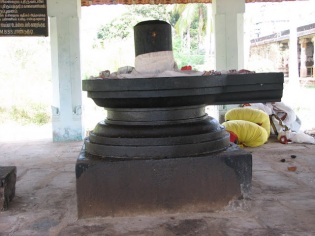 These forms are encoded within the structure of the Shiva Lingam. And, the real meaning of the Shiva Lingam is ascertained from what we have just mentioned. It is a visual form of the intermediary part of the manifestation process that is literally contained within each of us.

There is a story in Indian Purana that Brahma, Vishnu and Shiva discussed who is the most powerful among them. Lord Shiva challenged Brahma and Vishnu to reach his head and feet respectively. Brahma tried to find Shiva’s head and Vishnu tried to reach Shiva’s feet, both of them failed. Most of us would have heard the story but would not have understood the philosophical and scientific significance. 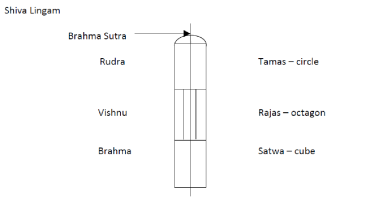 Shiva in the form of Lingam is represented as one of the five elements (Earth, Water, Fire, Air, and Space) in the temples.

1. Fabric of The Universe: The Origins, Implications, and Applications of Vastu Science by Jessie J. Mercay
2. Time = Space by Raguram Gopalan, http://ragsgopalan.blogspot.com