The map to given below is a close up of what Kumari Continent might have looked like before the global warming. The grey lines are what is now the shoreline of Indonesia, Philippines and the countries that currently exist as island continents and the Asian continent and countries in the ocean. It is estimated that this landmass that united what is today Western Indonesia and the Philippines with mainland South East Asia, China, and Australia was over 1.7 million square kilometers in size. 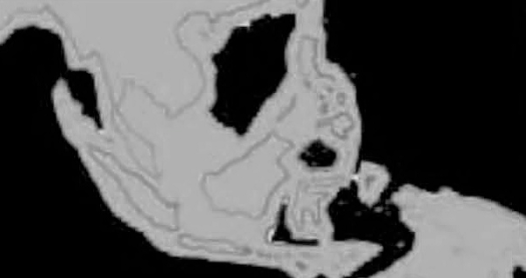 This enormous land mass had a large inland fresh water sea and apparently several smaller ones that might have supported a human population of millions. Kumaria was a 16 continent that existed for well over 30,000 years. This fact is substantiated by the changes in the ocean depths that remained low during that time – which, since then has risen 400 feet. The big thaw and the rapidly rising sea levels reduced Kumaria from 1.7 million square kilometers to less than 1 million square kilometers and increased coastlines more than threefold. The interior of Kumaria and the coastal areas where the heaviest concentrations of human population were located simply vanished beneath the sea. Traces of these ancient civilizations are being found off the coast of India, Japan, and other areas around the world.

The idea that there was an advanced ice age civilization is well founded. One clear example of such a civilization existed in the period of 35,000 to 12,000 years ago is found in Fukui Cave of Northern Kyushu Island, the south-western island of Japan, in the form of Jomon pottery containers. These (according to have been dated as slightly later than 12,750 +/- 500 years old, and therefore coinciding with the end of the advancing ice sheets and the increased global warming about 11,600 years ago (Joseph B. Lambert, Traces of the Past, 1997). The Jomon pottery most likely was taken to Fukui Cave of Kyushu by Jomon people of the ice age civilization when they fled the flooding of the surrounding lowlands during the worldwide deluge caused by
melting icecaps and related monsoons around 11,600 – 12,000 years ago.

Many stories of a lost continent and a lost civilization can be found in the folklore and writings of the ancient people. In Timaeus and Critias, Plato wrote the story of Atlantis a lost civilization that sank beneath the oceans. Ancient legends around the world tell of a great flood that swept the world thousands of years ago. Modern science has shown through the analysis of the earth’s ice caps and ocean levels that the earth experienced a great flood of cataclysmic proportions during 11,000 – 10,000 BC.

Current archaeological theories state that before 10,000 BC no early human civilizations developed agriculture or built great empires. Modern archaeology further states that during the Paleolithic age humans were hunters and gathers that lived a subsistence level comparable to the Neanderthal man.

Ancient literature of Tamil Nadu states differently. Contrary to general thought, according to these texts, a highly developed civilization existed during the ice age periods in the equatorial belt on Kumari Continent and in other places around the globe. The existence of music and musical instruments is a sign of a somewhat advanced culture. In China, the Institute of Cultural Relics and Archaeology of Henan Province, Zhengzhou, Henan, China holds a number of ancient flutes carbon dated to be over 9000 years old. These flutes are tuned very closely to modern pitch and have been exactly replicated to playable instruments.

In the Indus Valley numerous sophisticated carpenters tools were found as well as advanced indoor water systems and architectural forms. These date as far back as 9000 B.C. The civilizations of that day were not as primitive in some parts of the world as previously thought. As mentioned earlier, ancient Tamil texts say that there was a great migration from Kumari Continent far and wide around the globe between 10000 and 11000 B.C. due to its being engulfed by the rising oceans. Certainly the sophistication of that society provided the means for such a mass migration. One of the individuals who migrated to the Indian mainland was an enlightened sage named Brahmarishi Mayan. It is this Rishi who cognized the Science and Art that is the subject of this book.