The form of Mayan, according to tradition, is installed in Shiva temples and early Vishnu temples, seated in this way under a banyan tree, at temples throughout India. He is called Dakshinamurthi. Mayan is memorialized at these temples as Guru Murtha (the form of Supreme Master) and he faces South, from whence he came. Even today, Mayan is worshiped as “Supreme Guru” by enlightened persons. The knowledge of this has been lost to the public but has been maintained by the esteemed Vishwabrahmin Dr. V. Ganapati Sthapati who is actively building a Mayan Memorial in Mahabalipuram, Tamil Nadu, India. 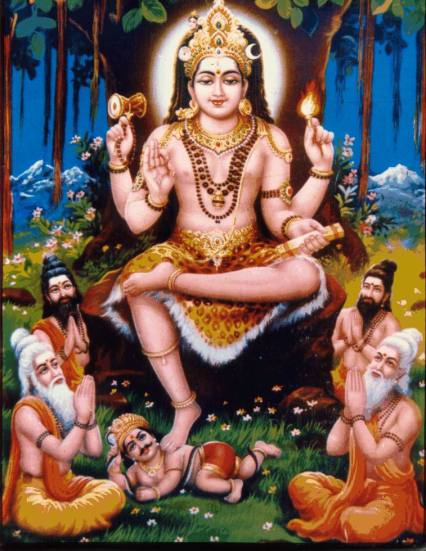 As per Religion / Saiva Philosophy, GOD Dakshinamurthy (literally means ‘One who is facing Dakshina or South) is an aspect of GOD Shiva as teacher or Guru of all types of knowledge. As Dakshinamurthy, Shiva is considered as the supreme iconic representation of the destroyer of ignorance and the embodiment of knowledge. In this aspect, Dakshinamurthy or GOD Shiva is regarded as the teacher of wisdom, arts, science, architecture, dance, music, and yoga.

At one point in history, many cultures based their architecture, art, herbology, astronomy/astrology, etc. on Mayonic Science. In addition to the East Indian culture, cultures of China, Tibet, Mexico and Central and Southern Americas used Mayonic Science and Technology as the basis of their culture. We see evidence of this in the precise mathematical Vaastu formulas evident in the many Mayan structures existing today in Mexico and Central America, China, Bosnia, Egypt, Japan, and in other parts of the world. The Aztec ruins in Mexico and the Incan ruins in Machu Picchu, Peru also demonstrate Mayonic measure and order. Recent discoveries in Peru have identified what appears to be pre Incan Mayonic structures. King Solomon’s temple is clearly a Mayonic structure and its’ architect King Hiram was a Sthapati trained in this science. It is a known fact that a number of kings were of the traditional clans of Sthapatis’ (traditional builders). One well known Vaastu Shastra – the Samaranga Sutradhara – was written by a king (Boja Deva).

One of those cultures even adopted the name Mayan – the Mayan culture of Mexico and Central America. The name Mayan is derived from Tamil – the language of South India and the language in which the original Vastu/Vaastu texts are written. Dr. V. Ganapati Sthapati visited Maya land and verified that the architectural principles of the Maayan temples were exactly the same as in Mayonic Science. In addition he found numerous Tamil words that were too similar to be coincidental. This is dealt with in advanced textbooks and studies in Mayonic Science and Technology.

According to Hunbatz Men – elder leader of Maayan people of South, Central, and North America – the Maya state that thousands of years ago, the sacred teachings from the cosmos were deposited in many magnetic centers throughout the world:

There are numerous Hebrew words that are similar or the same as Tamil words. Scholars have indicated that these language similarities originated from Tamil land. That is, Hebrew has its basis in Tamil. One such word is Ma’ayan. In Hebrew the word “ma’ayan” means spring, fountain, wellspring as in wellspring of knowledge. A women’s poetry group with this name exists even today. Interestingly enough, Mayan was a great poet.

The names of all these places are of Tamil/Maya origin, which indicates that, in different periods of time, there was a Mayonic presence in these places. Ancient Tamil literature confirms that Mayan and or his twelve main disciples traveled the world. It would make sense that when he sent them out to teach this knowledge, they would go to places around the world where there were people who spoke their language – the clans who left Kumari Continent and spread throughout the world. It is possible that is what brought Mayan and his Rishi students to other parts of the world to teach.

1. Fabric of The Universe: The Origins, Implications, and Applications of Vastu Science By Jessie J. Mercay. Text and diagrams, with permission, from Dr. Jessie Mercay, Fabric of the Universe, aumscience.com/wordpress. For any questions please visit http://www.aumscience.com.

10 thoughts on “Mamuni Mayan – Influence around the World”